Many years ago, in the late 1800’s, Gustav Eiffel, who built the Eiffel Tower discussed the potential for a below sea level tunnel connecting the UK to the continent. At the time this was impossible, but due to vast technological advances there is the chance for the Jongma Clan to travel on high speed rail between London St Pancras and Paris Gare du Nord, at speeds of 300 km/hr. Our first seconds in Paris were filled with the hype of a peak hour major train station. In the electric atmosphere it took mere moments to realise that between the rush of the city and the unfamiliar language it was going to be a large effort to transport 6 people and baggage across town.

After a trek across the Paris metro, our Airbnb accommodation was up 6 flights of stairs, and once Dad and I worked up a sweat carrying 20kg bags up we were greeted by an incredibly polite French man who took us around the accommodation. The first moments were spent attempting to acclimatise to the searing 40oC heat! After being in England for 7 months over winter it was a (welcome) shock! It would have been a greater laugh if the air con at the apartment was not broken… Luckily Daniel and my room housed the only working unit on all three levels, so night times were not as bad. Upstairs we had access to a rooftop terrace with panoramic views across Paris, in the evenings we were treated to the Eiffel Tower in dazzling beauty and the Monmatre’s Sacre-Coeur on its perch above the city. We climbed up the rickety ladder before settling for Ben and Jerry’s above the rooftops of an amazing city.

The next morning we aimed to hit the major tourist destination, the Eiffel Tower. I originally was not that keen but followed the family and was very surprised. Due to poor planning and sleeping in we ended up running through the streets to make the tour on time, and managed to arrive with two minutes to spare, albeit with red faces and sweaty backs. We took a tour down to the bunker below the tower which housed the French Army prior to WWII. It was interesting to see how quickly an area can change its purpose. The tower changed from centenary celebrations to warzone to major tourist attraction all in the space of 40 years. Next we climbed to the second level for gelato and a few pics. After hearing all about the tower and a bit about the city, including the other statue of liberty we took in incredible views of the River Seine and overlooked the entirety of Paris. We decided that halfway wasn’t good enough so got tickets to the top were we had an even better view and champagne was available! We spent until the sun started to set there and managed to walk all the stairs down to the bottom… 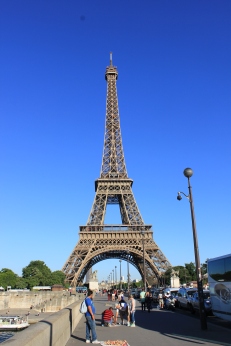 Paris is known for its brilliant foods. No.1 on my vast holiday list is always to eat well and plenty on holiday, which to the dismay of my gym goals and trousers makes the trips significantly more enjoyable. My favourite experience of Paris was going to a deli and purchasing a variety of tapas style foods, and sitting by our window overlooking a main shopping street enjoying the warm weather and family time. 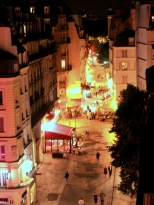 View into street below in evening

View from roof in morning

Paris still had a trove of various gems to be seen, including the Arc de Triomphe, which can be climbed for Panoramic views of the city, which is worth while seeing the layout of the streets all conjoining at the central, chaotic point. Apparently, traffic is so crazy dangerous there, that insurance companies refuse to insure cars while on the roundabout! Another spot is the Monmatre, which houses the artistic side of Paris, and a great basilica. The Palace of Versailles  is worth a visit for the architecture and gardens alone, I would have enjoyed a visit inside but was unable to due to time and baggage. 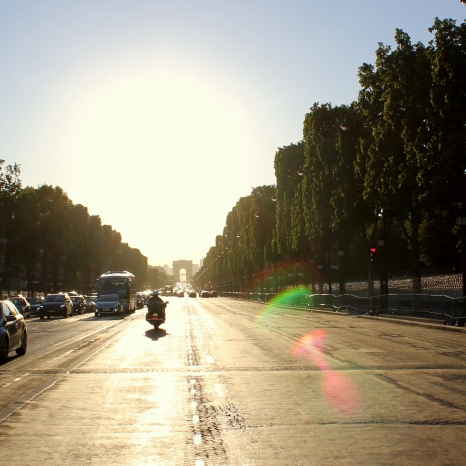 View from the Arc 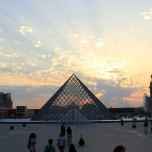 Near our accommodation is the glorious and famous museum of The Louvre which houses the Mona Lisa and her reputable smirk.I would recommend visiting as late as possible in the evening, the museum closes at 9:30PM so going later will ensure you will get a much better chance to see the painting. I will be honest, I was a little underwhelmed but it is worth at least a glimpse of such a famous painting. The Louvre Pyramid and the surrounding building is also a wonderful display of art and architecture.

Next stop was the incredible floating city of Venice. It is a city which is almost romantically fighting a desperate battle to prevent the ground from drowning. We first arrived to an amazing sunset and a speedboat ride from the airport to our next apartment. The ukulele was brought out in full force to perfect the atmosphere (from my point of view anyway) and our first taste of the aqua toned canals brought us to a strange white tree sitting on the banks of the Grand Canal before settling into a brilliantly air-conditioned room.

One of the best things to do in Venice is to take a walk around town. The major bucketlist locations are all within a short walk of each other and most can be seen in a day. The lanes and smaller canals are the keys to finding the cities most magical scenery.  Just soaking up the environment was a great way to really relax and enjoy the atmosphere. The Rialto bridge is worth walking through, but not the most amazing of all the places to go, and has a rep for being pickpocket central. St Marks Sq is a big must do, from the pigeons that cover the open areas to the window shopping around the outside. The Basilica of St Mark is worth doing if you have a short line and an interest in old churches, but I preferred sitting outside in the sun with gelato rather than waiting for an hour to walk through a church built in a similar manner to every other gothic building. 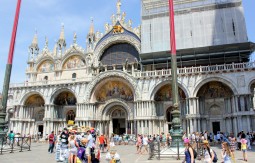 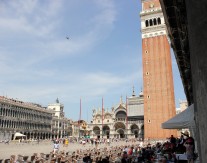 Writing the word gelato triggered a most incredible memory of Venice… Food. Restaurants galore line the streets all begging for your attention and it’s very difficult to pick! My advice is to go just into the backstreet and find a smaller, more authentic Venetian eatery, and try order in Italian! I had the example of my sister, Lucy, who made every effort to work on her language skills wherever she could find a local! The Italian method of eating out is very different, there are so many courses! There are bread appetisers, a pasta dish, a meat main and a desert of brilliant gelato and coffee! Of course you do not need to do both a pasta/meat meal, but don’t expect there to always be huge portion sizes… After you have stuffed your face and body with fine Italian food, a Gondola ride through the canals is well worth doing. It is expensive but can be shared amongst 6 people to lighten the load! Try and find a ride away from the main tourist spots, as congestion can mean you get less bang for your buck. Try chatting to your driver (if you call them that?) about their experience of the city, as it is a great way to gain a little extra insight into the culture. The six of us had a fantastic time relishing in the beauty of city fighting to breathe.

Venice has had to be rebuilt layer upon layer as the sea has slowly encroached upon the territory, which means that it is similar to London and New York in that it is constantly building and changing. Only this time you have to consider historical buildings, methods of transport and ensuring it stays upright! I found this one of the greatest bits of Venice, the challenge of maintaining the stuck in time renaissance feel, with the continual need for them to build and rebuild.

I have to say the atmosphere of Venice has been my favourite so far this year. It was a city between two worlds, and an environment that needs only surf worthy beaches to make it straight to the top of my retirement city list. It’s sad to say my days there ended all too soon, and as #jongmasjourney continues, the next stops are the Amalfi Coast, Pompeii and Rome. I am stoked with the second half of my Italy trip and am looking forward to sharing my experiences with you.

Until next time, and as Grandma’s friend Laurie always says…

One response to “Paris and Venice”