“Perhaps Mother Nature is punishing us, he thought, for our greed and selfishness. We torture her at all hours by iron and wood, fire and stone. We dig her up and dump her in the sea. We sink mineshafts into her and drag out her entrails – and all for a jewel to wear on a pretty finger. Who can blame her if she occasionally quivers with anger?”
– Robert Harris, Pompeii

After sadly dragging everyone off the beach and sea into a taxi the next stop on #allthejongmasjourney was a vast change in scenery. The famous ruins of Pompeii were baking in the summer heat, as two families riddled with pasty Dutch genetics lathered suncream to avoid the next few days role playing a tomato. We met our guide outside a conveniently placed lemonade stand, picked up our tickets and strolled into an ancient city.

The first moments for the tourist are found wandering through the outskirts where the river used to run. Our guide pointed out the fact that we were in fact standing on ground nearly 6 metres higher than during Roman times. Pompeii itself was built above old buildings, as it was too much effort to knock the old buildings down- the Romans would just build above! This has meant there is the opportunity to dive into the full history of the city buried in time for nearly 2000 years. 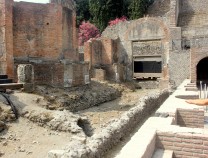 If you have never heard of the Pompeii site before, it’s a Roman port town that was covered in ash and then lava when a nearby volcano Mt Vesuvius blew its top. This meant that both the cities of Pompeii and Herculaneum were instantly buried but almost perfectly preserved in time, allowing modern day historians to get a significant insight into the culture and life of the Romans living in the city. Pompeii is by far the larger and more historic site, with extensive detail available to obtain insight into the lives of the locals. Many people fled the eruption, taking gold and personal possessions, but largely the homes are intact, other than wooden roofs which burned away.

Pompeii was founded in the around the 6th century BC by the native central Italians, but after a failed rebellion of Rome was officially annexed in 89BC. The Romans vastly developed an expanded the area, adding the longest aqueduct on Earth until modern times. Wine was a major export, as the volcanic fertile ground produced wonderful grapes. It became a major port town, and a centre for trade due to its positioning, and also a well known holiday spot.

The entire town was buried in up to 6 metres of ash and rubble. It was a slow process, and I’ll skip the lecture to save time recounting history when Wikipedia is more than adequate for those interested individuals. However, the result was an entire Roman town buried in time, nearly perfectly preserved due to the absence of oxygen and water.

Even the people who died have had their bodies preserved, but by pouring plaster into the moulds of where the not so recently deceased lay, it is possible to get a full model of the exact position they died in. These have been helpful to identify professions, lifestyle and basic anatomy of humans of the time. 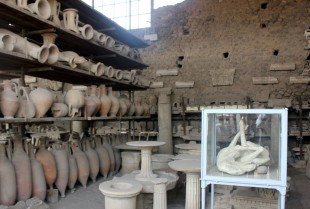 Herculaneum is the lesser known little brother of Pompeii. It is closer to Vesuvius (4 km rather than 8) and was engulfed in lava first, which has made for a difficult excavation. The town was more of a resort town for the very rich unlike the middle class Pompeii, and had pools, spas, decorated baths and was designed to serve as a retreat from Rome if one could afford it. Once again the fertile land made for good farming in the surrounding areas. The town was situated right on the sea, and the dockside has been pretty much completely excavated, while the other half remains buried under multiple apartment buildings. I personally found the experience more enjoyable, as the town is smaller, but better preserved and richer in artefacts and utilities. 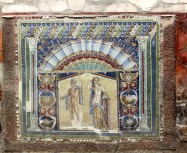 Water fountain with statue of godess

Decor in a rich mans home

Docks with body casts inside

As a tourist, my visit was under some extreme heat conditions, so even though there are a few fountains, I would strongly recommend bringing water with you. The other major tourist consideration is not to bring bags! You are not allowed to take anything more than a small camera bag or purse into the cities! With that in mind here are my 5 must dos for Pompeii and Herculaneum.

#jongmasjourney now makes its way to Rome itself! Stay tuned for more updates, subscribe on the left!