Avignon, in southern France is built upon the Rhone River and in the 14th Century this now small tourism town was the home of the Catholic Church for 60 years. Today, it stands as a small and lively student city, surrounded by its 800 year old stone walls. At the heart of this city is the enormous Palais des Papes, which was the home of the Catholic Church between 1309 and 1377.

It’s a piece of architecture which will definitely suit any history buff, while the Wednesday evenings would be the ideal point of interest for a party goer. Before visiting the palace, take a stroll around the city walls and to the 4 remaining arches of Pont Sant Benezet. This is a bridge constructed around 1345 by Pope Clement VI. This bridge, alongside the Cathedral and the Palpal Palace are considered a UNESCO World Heritage Site.

The entrance to the Palace is a large square, where you will first notice the beautiful but somewhat undecorated front façade. Compared too many other monuments it seems rather cavernous but bare. It is certainly not as rich as the modern Vatican City. Before we go any further here is your necessary information!

Opening hours: 9AM to between 6 and 8PM (depending on the season)

Guides and Tours: Guided tours available, however an audio tour will do for most people

Who is this for?: History Buffs, and people of faith will find this very interesting. So, it’s not a huge point if you don’t fit those!

Once you have entered into the palace, you will walk into a main courtyard, and through a few corridors and chambers. This is where the emptiness of the whole palace will hit. The walls are very empty and plain stone, and the roofs are high and often blackened.

The next stage of the tour is a relatively general run through of Catholic history, and I’m sure that’s not of huge interest to you readers so we’ll skip!

The tour takes you slowly through various exhibits of worship and catholic practice before you end up in a garden. While it’s a bit overgrown, this was the recreation area for the Pope and other Catholic officials. While it in itself is not spectacular, the idea that the ground is the same walked upon by the people who directed the entire Catholic faith and had such control in Europe was a little bit weird!

The rest of the tour follows through the kitchens, dining halls and Cathedral before eventually leading you out into the square again. It would be a shame to spoil all the historic experiences of the visit with a list of boring facts, but below are 5 major points of why the Palais Des Papes is a great visit!

Check out these pictures! 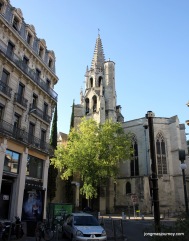 Untill next time, and as Grandma’s friend Laurie always says…