We begin our United Kingdom and Ireland Adventure with the first stop in Oxford. A University town which boasts arguably the most prestigious educational institution ever; regularly birthing leaders and academics of the highest standard. Although today rolled in a busload of layman tourists to wander the famed roads of Narnia and Lord of the Rings inspiration.

We are initially greeted by a giant obelisk dedicated to the troubled past of conflicting religious identity in the area. The protestant reformation led to bishops being burned in the square and then Gothic monuments to remember them. A solemn moment to observe the struggle of the past compared to the beauty and peace of the current day town. We were also told a story of local kids who would charge unsuspecting tourists 2 pound to enter the “underground church” beneath the monument only to lead them into the public loos and run away with the money…

We walked down to see our first glimpses of the neoclassical buildings that grace the town with its majestic nature. Trinity college was our first stop and it was inspiring to see the doors and windows that would have held the likes of Einstein and 50 other Nobel Prize Winners. This is also where we began to understand the ‘little Amsterdam’ remarks, having a sea of bicycles flowing down the road. On the other side of the street were a number of wacky, giant stone heads staunching us from atop some very high stone pillars. Apparently they guard the hall were PhD students have their graduation ceremony.

Next we caught a glimpse of a Venice-esque bridge built due to lazy professors not liking stairs between their office and their classroom. Wandering underneath us led us to a secluded pub frequented by the Harry Potter cast and crew during filming in the area. Considering it was far too early to stay there for a drink we moved on to a library that holds more books than a man could read in a lifetime. The Radcliffe Camera has no relation to photography or the Harry Potter actor, but it is part of an extensive library network and Palladian style dome symmetrically adorned with various intricate stone workings and topped with a golden dome. Around the Radcliffe Camera is grass which used to be the site of ‘dispute settlements’ by way of physical entanglement (fights to the death). The story goes that slowly as the grass filled with blood (and more likely rain) multiple sinkholes would grow. This meant a student wandering for lunch on the lawn could regularly end up with their feet dangling through the ceiling of the Bodleian library beneath.

Behind this grass stands a spectacular, gothic church of where C.S Lewis began some clerical work, although he would remain a church layman and never enter full time ministry. It was also the site of the trials for the aforementioned burned bishops. What holds more interest for many of us 20-something year old travellers, is in the alley next door. Indeed, a looming wooden door and flickering lamp post are the reported inspirations for Narnia. The entrance to the alley also has a viewpoint for the exact room Tolkien wrote Lord of the Rings. It was pretty surreal to consider we walked the same mile as Tolkien, Lewis and Dyson would to get to a local pub to chat on all matters of faith, academics and trade ideas for essays or fantasy novels.

The Narnian lamp beside Lewis’ church

One of the cool things about Oxford is the ability to just wander. We didn’t have the time to climb a tower and get a view, but we could walk through the town and see the field where Harry Potter’s Quitdditch scene was filmed. After a coffee and local Cornish pasty we were on our way to the next stop, Stratford-Upon-Avon.

One of the Colleges 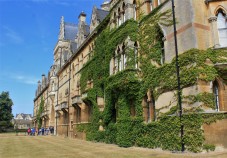 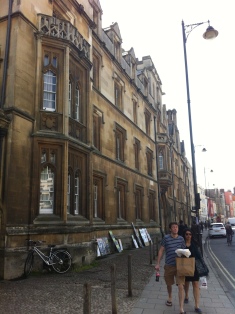